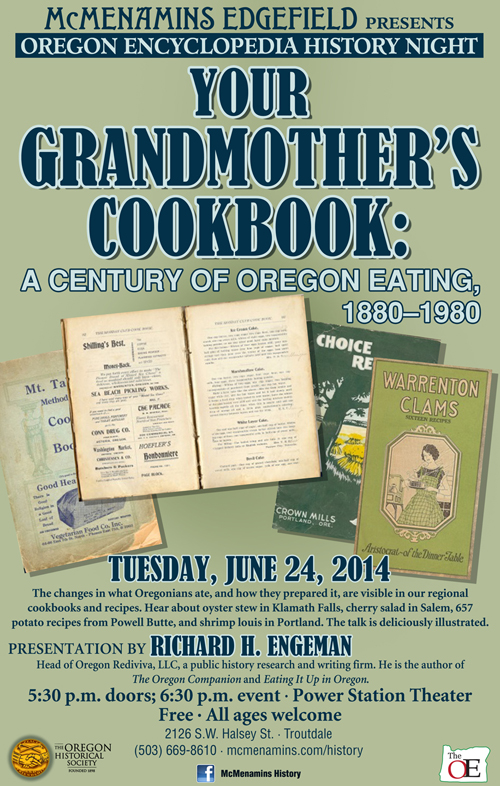 The OE History Night at Edgefield

The changes in what Oregonians ate, and how they prepared it, are visible in our regional cookbooks and recipes. At this OE History Night hear about oyster stew in Klamath Falls, cherry salad in Salem, 657 potato recipes from Powell Butte, and crab Louis in Portland.

As Oregonians are expanding their patronage of farmers’ markets, investing in heirloom vegetable seeds and seeking out locally-sourced restaurant meals, they are also searching for connections with the foods and recipes that sustained those who lived here a century ago. This search has inspired a new field of regional food history—of Oregon foodways—to examine questions about what we ate and how we prepared meals. Historical cookbooks are one source for food history along with other evidence such as menus and promotional leaflets that help trace the path of Oregon foodways from the railroad era of the 1880s into the late twentieth century.

Richard Engeman is a regional historian and a former archivist and university librarian. A native Oregonian who grew up on the North Coast, he is particularly interested in the region’s transportation and architectural history and in Pacific Northwest foodways. Richard is the author of The Oregon Companion: an Historical Gazetteer of the Useful, the Curious, and the Arcane and Eating It Up in Eden: the Oregon Century Farm & Ranch Cookbook.
Posted by Richard H. Engeman at 8:11 PM 2 comments:

This is reunion week at my alma mater, Reed College. In a previous blog I posted a short piece on two Reed-related publications that now fall into the realm of local historical foodways documents: Jay F. Rosenberg’s The Impoverished Students’ Book of Cookery, Drinkery, & Housekeepery (1965) and The Essential Ingredient (1973), compiled by Reedies David and Margaret Mesirow and others.

Here’s another: Cheap Meals for Reedies, by Pete Lomhoff (1965). A 19-page pamphlet that sold for an exorbitant 24¢, Cheap Meals was a guide to affordable Portland restaurants, especially those that were open on Sunday evening, when Reed dorm residents had no meal service. (This practice ostensibly encouraged dorm students to mingle with townies and professors, who would genially invite them to Sunday dinner. Hah.)

Cheap Meals reveals the truth that, fifty years ago, Portland was far from being the foodie haven it is considered to be today. Caffee Trieste was the sole noted outpost of coffee culture: “Loses. Espresso 20¢, cappuccino 25¢. … It just isn’t very good.” Hamburgers? There are capsule reviews of three places on Powell Boulevard: Waddle’s Charbroiler (“… you can pile on as much pickle and other junk as you want”) and a McDonald’s (”Soggy fries”; McD’s is still there), and the late, lamented Whizburger; the lamented loss, however, is of the sign, not the hamburgers.

For foods of foreign lands, there was little to consider but the Cantonese cuisine of The Republic (“no, it’s not called the ‘New Republic’”), Dave’s Delicatessen (“It isn’t like Mama’s on Lexington Ave., but it’s the best in town, and it’s closed on Sunday”), and the totally unexpected Kitchen Kettle, serving “good Armenian food in a modern American building constructed primarily of corrugated fiberglass, like over a swimming pool.” 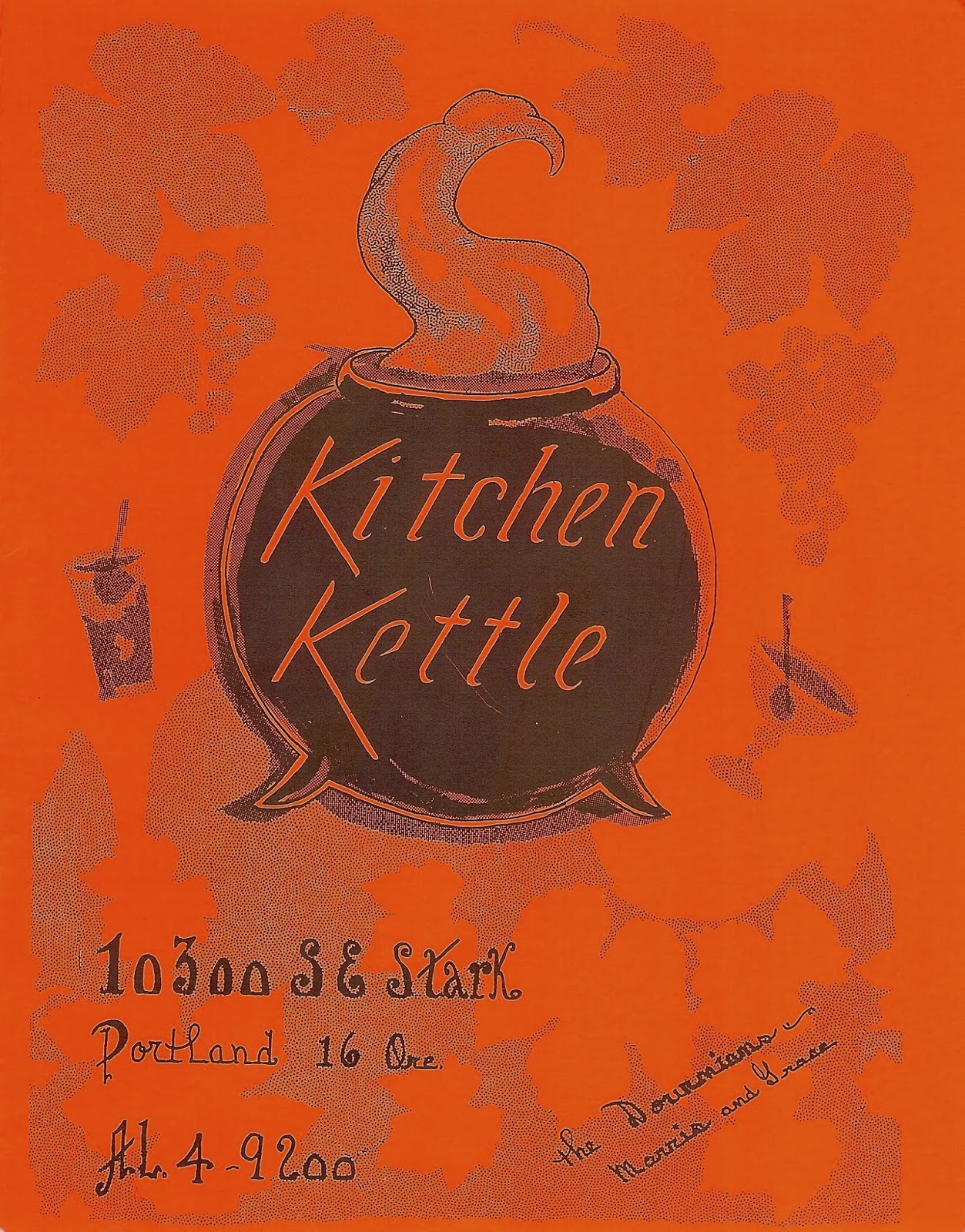 Posted by Richard H. Engeman at 4:10 PM No comments:

Richard H. Engeman
Albany, Oregon, United States
Richard H. Engeman heads Oregon Rediviva, LLC, a public history research and writing firm. He is the author of "The Oregon Companion" and "Eating It Up in Eden." See his website at www.oregonrediviva.com.